J G Whitfield was a pioneer in Southern Gospel music. He sang bass with the Florida Boys. He founded the Dixie Echoes and Singing News magazine.

After serving in the Air Force during World War II, he formed the Gospel Melody Quartet in 1947. Glen Allred joined the group in 1952, with Les Beasley coming on board the following year. In 1954, Whitfield changed the group name to the Florida Boys. After his first wife died in a car wreck, Whitfield remarried in 1958. He quit singing with the Florida Boys that year but continued to own the group for several years.

Two years later, he got the itch to sing again and formed The Messengers with his brother Joe and sister-in-law Sue. That group’s name later became the Dixie Echoes.

Along with the Florida Boys, Whitfield helped launch the black and white Gospel Song Shop program on television which set the stage for the highly popular Gospel Singing Jubilee in the years that followed. During this same time period, Whitfield was also gaining experience as a concert promoter across the South and helping to launch the careers of many up-and-coming groups in the process. He formed Jubilee Enterprises in 1966, selling records, songbooks, and sheet music.

In May of 1969, Whitfield published the first edition of The Singing News in a newspaper format. The following year, he added a monthly airplay chart and started the annual Singing News Fan Awards. The magazine was later sold to Maurice Templeton.

In 1970, Whitfield launched the International Gospel Song Festival which was a popular concert event. In 1979, he purchased the National Quartet Convention from J D Sumner. He merged his own festival with NQC, then after running the convention for two years, sold stock to several group owners and businessmen. The convention is still managed using a board of directors as established by Whitfield. Another business venture Whitfield undertook was joining forces with two fellow concert promoters, W. B. Nowlin and Lloyd Orrell, to form the Skylite Talent Agency.

Whitfield never lost his desire to sing. Even after he passed the age of 90, he was still making appearances singing bass with a Florida group called the Workmen Quartet. 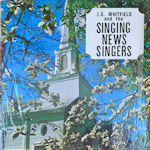 hi-res
???? JG Whitfield And The Singing News Singers (Bibletone Records/BSLP 148): He Will Roll You Over The Tide; I'm Going Up; The Blood Will Never Lose Its Power; It Is Finished; The Sun's Coming Up; Jesus Is Leading Me; Rise Again; Until Then; Walk With Me; I Walk In The New Jerusalem Way; He'll Hold My Hand.
All articles are the property of SGHistory.com and should not be copied, stored or reproduced by any means without the express written permission of the editors of SGHistory.com.
Wikipedia contributors, this particularly includes you. Please do not copy our work and present it as your own.