Wally Fowler began his career as a professional gospel singer in 1935 at the age of 18. He sang baritone with the John Daniel Quartet.

He founded The Georgia Clodhoppers to sing country music in 1943. The group was renamed the Oak Ridge Quartet after they were routinely scheduled to entertain workers at the Manhattan Project compound in Oak Ridge, Tennessee during World War Two. Fowler started a total of four versions of the Oak Ridge Quartet and was associated with the group name into the 1960s. A lawsuit filed by the third version of the group ultimately forced Fowler to relinquish the name in the mid-1960s.

In 1948, Fowler launched a popular series of "All-Nite Sings" from the Ryman Auditorium in Nashville, Tennessee, home of the famous Grand Ole Opry. He would later take the show on the road across the Southern United States. During the 1950s in addition to promoting his concerts, Fowler hosted a television show called The Wally Fowler Show.

Fowler was also a songwriter who had songs recorded by several Country and Gospel artists. He published some songs using "Bea Packer" as a pseudonymn.

Fowler was 77 years old when he died in 1994. He fell (possibly due to a heart attack) while fishing from a dock and drowned.

1967 Gospel Sing: The Fourth Man; Where No One Stands Alone; You Can't Run Away From God; Down In The Valley Of Prayer; Higher On The Ladder; The 4th R Religion; A Rusty Old Halo; The Air The Sunshine And The Rain; In The Middle Of The Night; Hear Them Bells. 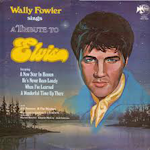 1977 Wally Fowler Sings A Tribute To Elvis (Dove Records International): Introduction By Wally Fowler; A Wonderful Time Up Here; A New Star In Heaven; Just A Closer Walk With Thee; I Bowed On My Knees And Cried Holy; Mother Mine; When I've Learned; He's Never Been Alone; Amazing Grace; How Great Thou Art; The Chair That Rocked Us All. 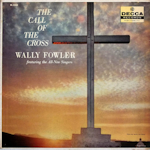 hi-res
???? The Call Of The Cross (Decca Records/DL-8560): The Call Of The Cross; Singin' Camp Meetin' Style; The Signs By The Side Of The Road; Precious Memories; Traveler's Rest; Let Me Walk Let Me Talk; Just Over The Hill; Somewhere A Voice Is Calling; Don't Be Afraid; As An Eagle Stirreth Her Nest; Journey Of No Return; Down In The Valley Of Prayer. 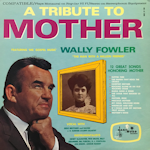 hi-res
???? A Tribute To Mother (Nashwood Records/NWCLP100): Mother Mine; Sweetest Mother; Wrinkled And Old; My Child! Welcome Home!; The Chair That Rocked Us All; Mama Sang A Song; Rocking Alone In An Old Rocking Chair; Mother's Gone; The Hands That Rock The Cradle; Precious Mother; If I Could Hear My Mother Pray Again; Supper Time.

???? Golden Gospel Memories Volume One (Gospel World Records/GW102): Just A Closer Walk With Thee; Peace In The Valley; My God Is Real; Beyond The Sunset (Should You Go First); Will The Circle Be Unbroken; Without Him; Time Has Made A Change; I'll Fly Away; God Walks These Hills With Me; I Know Who Holds Tomorrow; No Tears In Heaven; Life's Railway To Heaven; There's A Light Guiding Me; If I Could Help Somebody; Wasted Years; Someone To Care; Steal Away; When God Dips His Love In My Heart; The Last Mile Of The Way; Old Pappy's New Banjo; Where Could I Go; Father Along; Brighten The Corner Where You Are; He'll Understand And Say Well Done; The Old Rugged Cross.

???? Golden Gospel Memories Volume Two (Gospel World Records/GW103): God Is Not Dead; Dry Bones; A Child Of The King; Psalms Of Victory; I Feel Like Traveling On; The Bible Tells Me So; Touch The Hand Of The Lord; Roll On Jordan; Sweeter As The Days Go By; I'm On My Way; It's Just Like Heaven; He'll Pilot Me; Jesus Is A Way Maker; Daddy Sang Bass; It Is No Secret; I Saw The Light; Where No One Stands Alone; I'll Fly Away; Without Him; Across The Bridge; I Am A Pilgrim; Seek The Lord Today; Perfect Joy; My God Is Real; Someone To Care.

All articles are the property of SGHistory.com and should not be copied, stored or reproduced by any means without the express written permission of the editors of SGHistory.com.
Wikipedia contributors, this particularly includes you. Please do not copy our work and present it as your own.