Wendall Lee "Wendy" Bagwell was born in 1925 in Chamblee, Georgia, the son of Cajer and Arza Bagwell. After serving as a United States Marine where he was twice decorated for bravery, Bagwell returned home where at the age of 21, he adopted an abused nephew. In 1953, he formed Wendy Bagwell And The Sunliters. Their first major hit was a sentimental song called “Pearl Buttons.” Over the next 40 years, the group released more than 60 recordings. In 1968, they famously played at Carnegie Hall in New York City.

Bagwell's group is best remembered for their 1970 release titled Here Come The Rattlesnakes. The title track featured Bagwell’s hilarious comedy routine about the Sunliters singing a date for a church that handled snakes in their worship services. It was the number one “song” on the Singing News chart from November 1970 to January 1971. In 1975, Bagwell released his first all-comedy album titled Bust Out Laffin on Canaan CAS-9765.

Bagwell was later hired to be a spokesman for Stanback brand headache powders in a television ad campaign. He became nationally known for his signature catch phrase “and that’s a fact with my hand up.” Some of his other comedy routines included “Ralph Bennett’s Volkswagen,” “Me, Old Ronnie, and the Monkey,” and “Pickin’ Up Paw Paws.” While carrying on a steady singing career, Bagwell also operated a furniture business in Hiram, Georgia.

hi-res
1970 This That And The Other (Canaan Records/CAS-9679): Here Come The Rattlesnakes; They All Wore Wigs; Trouble In Europe; Pickin' Up Paw Paws; Then We Played Carnegie Hall. 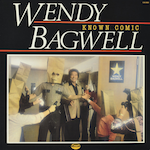 All articles are the property of SGHistory.com and should not be copied, stored or reproduced by any means without the express written permission of the editors of SGHistory.com.
Wikipedia contributors, this particularly includes you. Please do not copy our work and present it as your own.